A KILL TO TEACH- KANHA

A KILL TO TEACH- KANHA

When someone experiences a tiger kill in jungle its thrilling but when someone sees a tiger kill involving both male and female it becomes a blessing. This is what I feel- That I have been blessed to witness this rare natural history moment. Why rare I shall explain in the below description.

It was hot summer at Kanha and on 30th April 2019 the heat intensified further. On the evening safari of 29th April we got the news that in Mukki zone, a female tigress name CHOTTI MADA (who also had a 5 month old cub) had made a kill of chital (deer).  My next morning safari on 30th April was also in Mukki zone and we decided to explore the same place as there would be a better chance of sighting of the tigress as she might venture out at nearby water body to cool herself during the process of finishing the kill.

We got ourselves placed and aligned on the ridge of the bridge amongst the crowd, below which was a small water body. We waited for about 15-20mins looking for some hint & alarm calls of her movement. There were intermittent deer calls. We were assuming that the mother and cub would be inside the dense foliage and the cub might be playing with her mother and it must be his movements that might be causing deer to raise the alarm call.

Suddenly the intermittent alarms became continuous. There appears CHOTTI MADA out from the dense foliage. She waits for a minute, scans the area and takes her first step down the slope. Step by step she passes through the dry riverbed. En-route was a small hilltop. I waited there for her to reach the spot. That angel was perfect to capture an image where it felt like she has just popped out from the grassland. She kept walking towards the waterbed below the ridge, drank water and retreated. 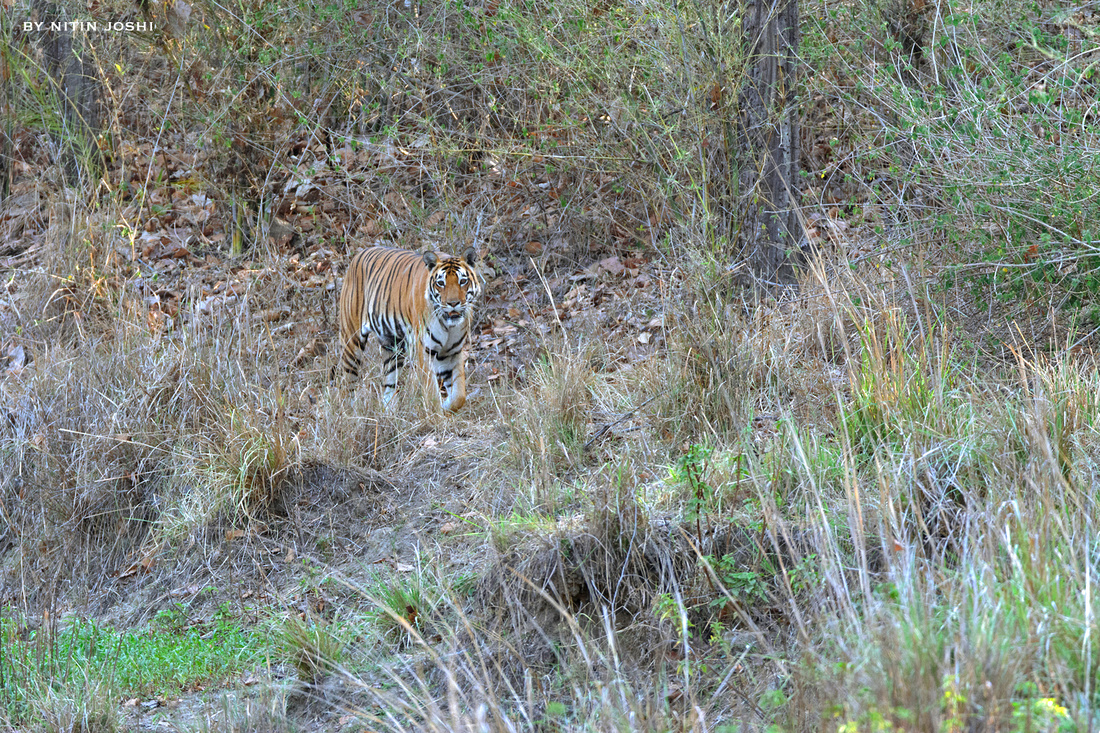 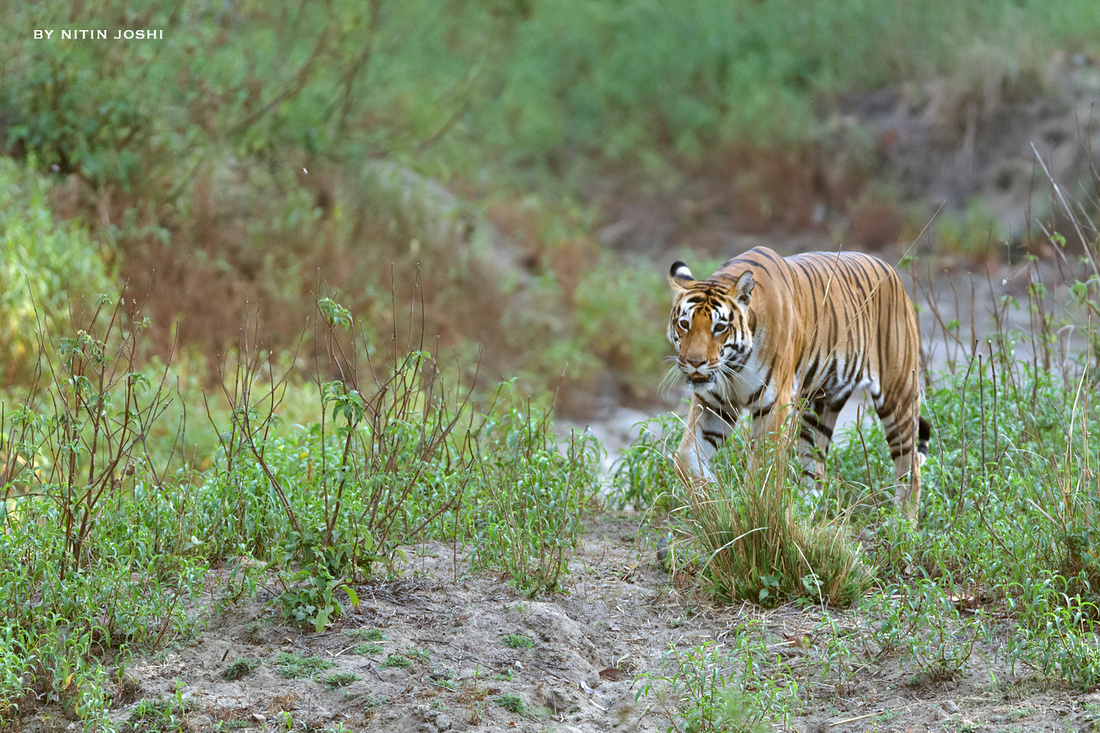 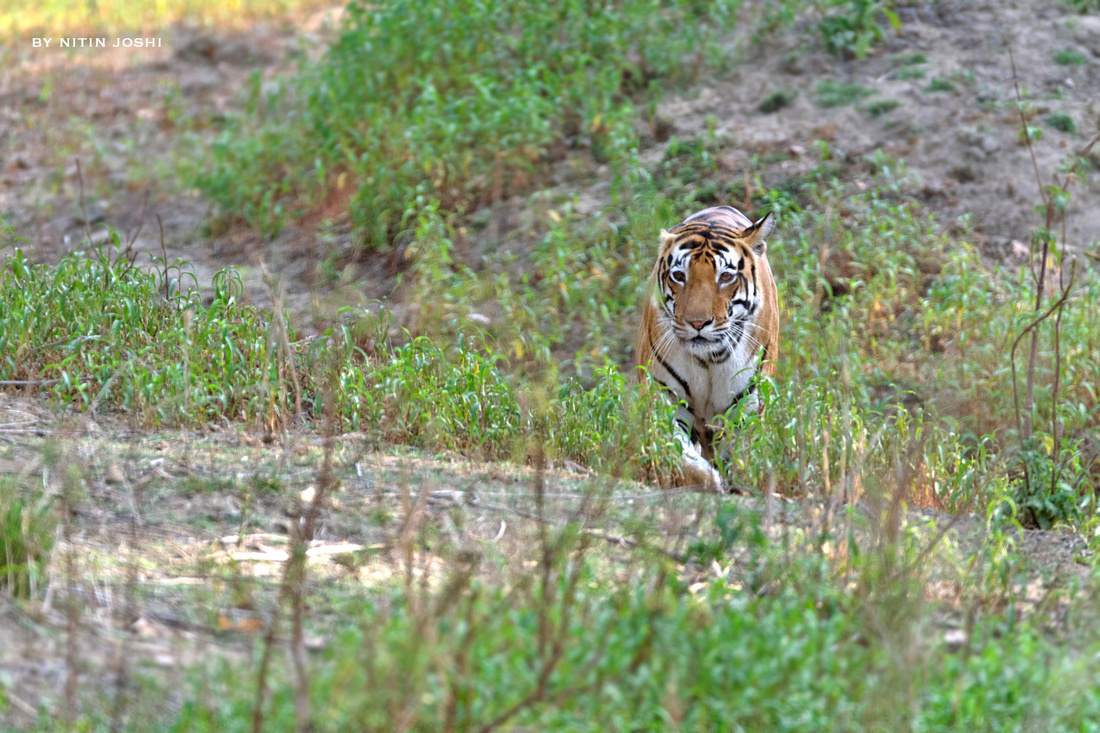 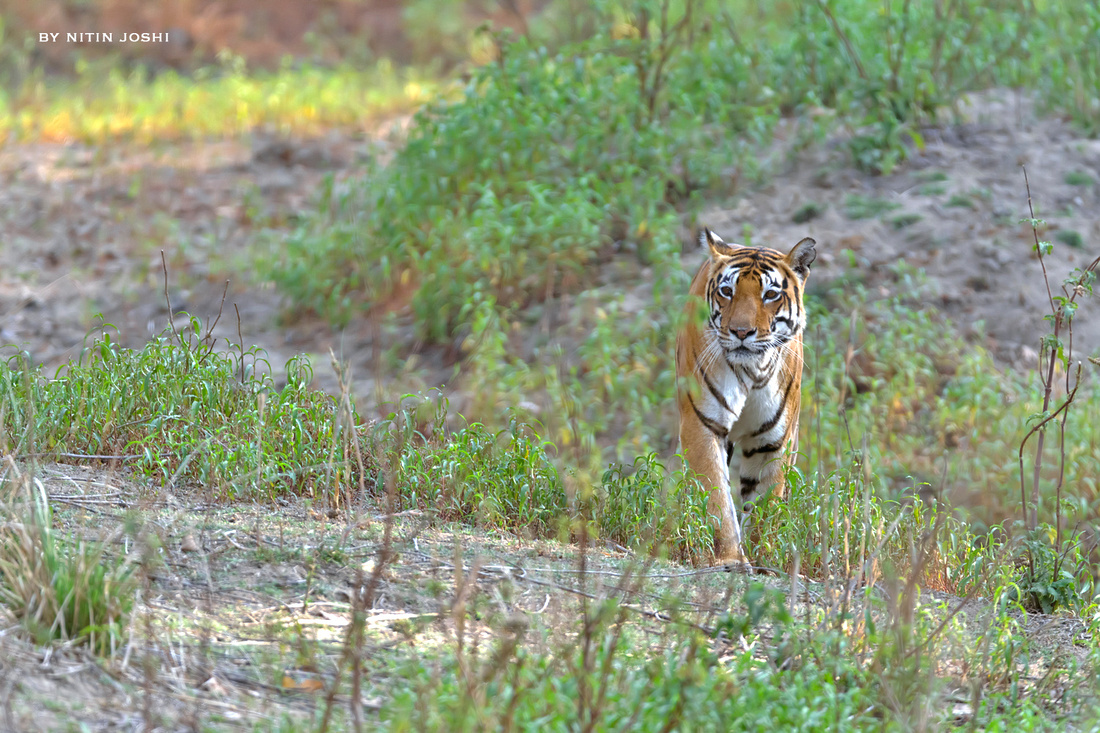 After walking a small distance she stopped and looked at the place from where she came out of the foliage. We assumed that she was calling her cub and after a minute the cub arrived. The cub came down and played with his mother for some time. Amidst their play surprisingly, both mother and cub started to look at the foliage from where both of them came out. 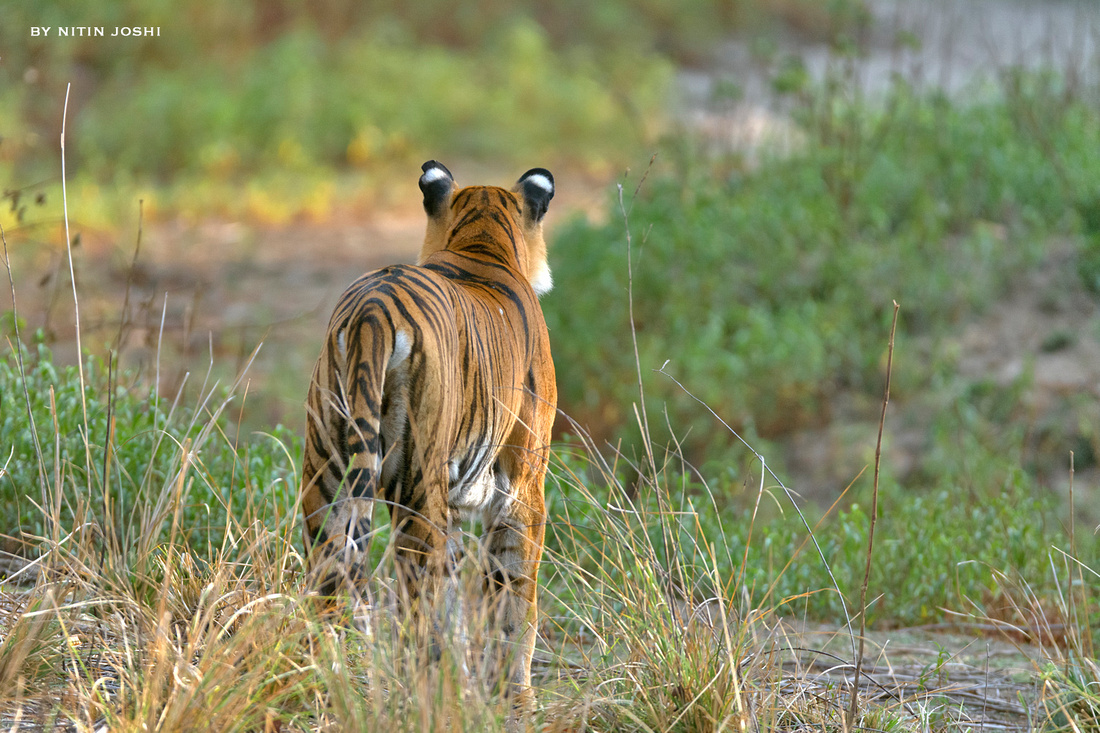 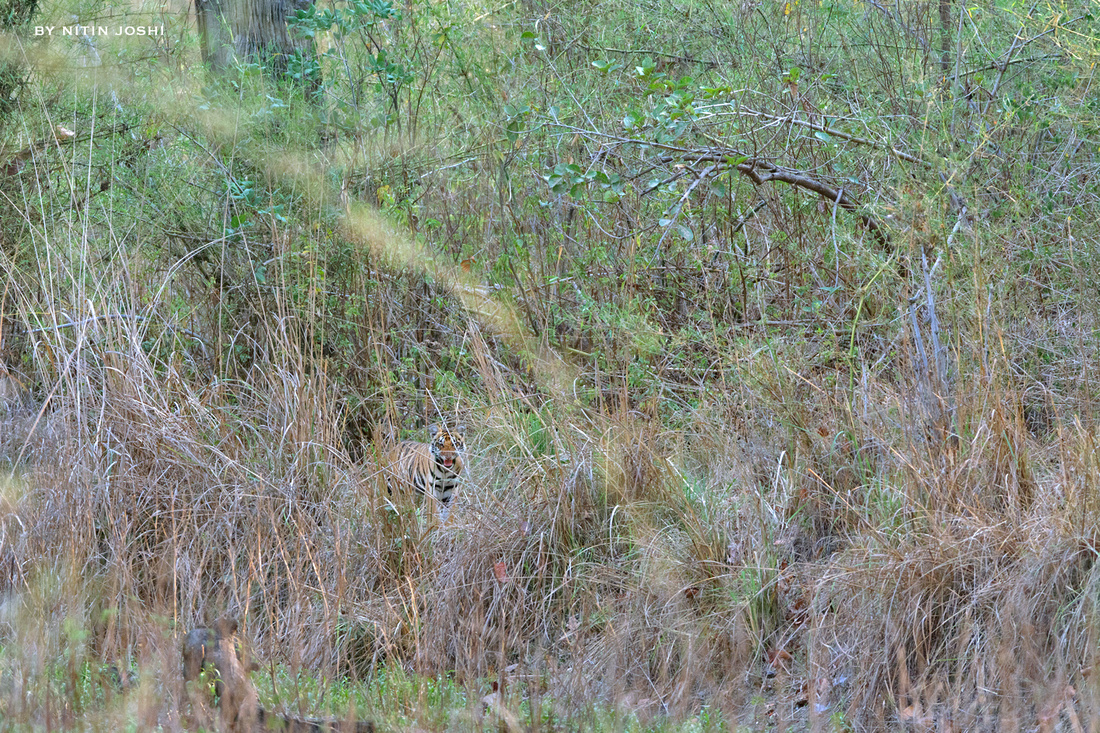 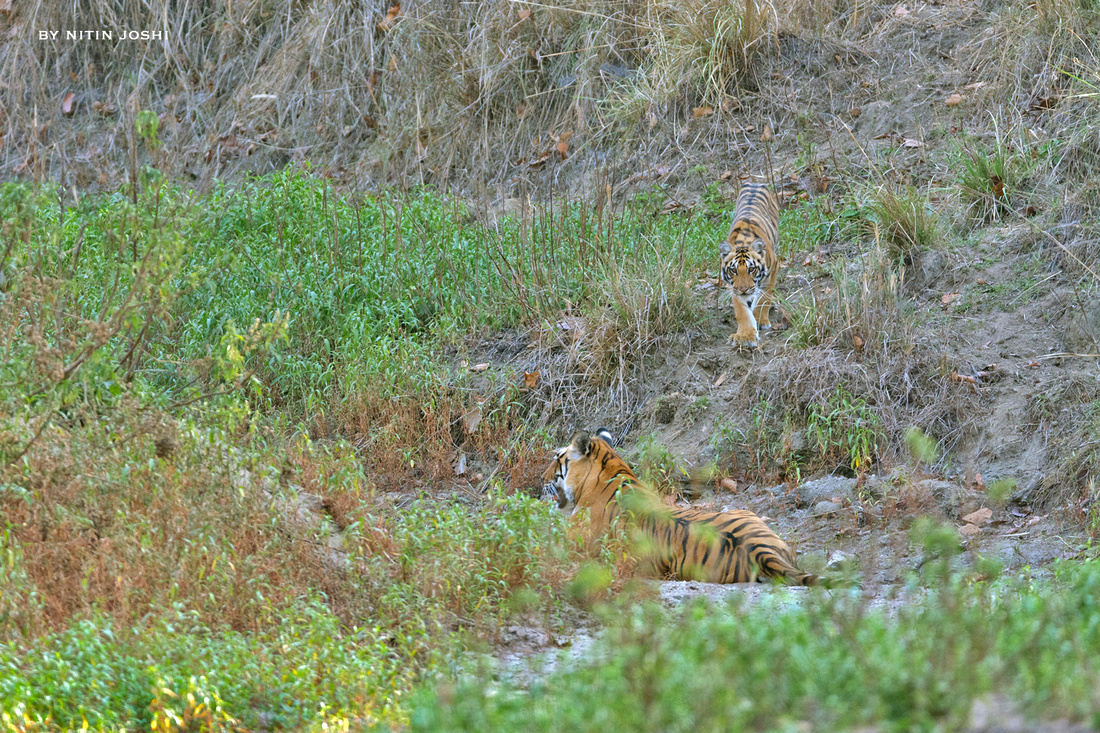 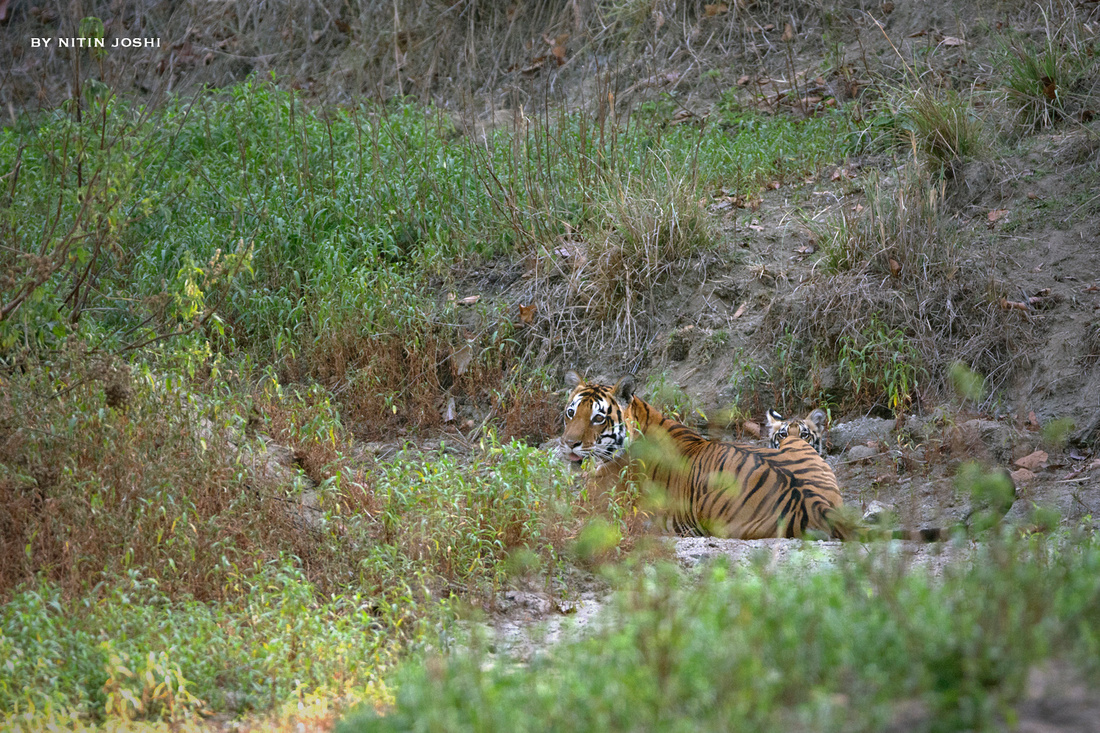 And there came his dad the mighty UMAR PANI MALE tiger. A huge male with flamboyant face emerged from the foliage and strolled towards the place where CHOTTI MADA & the cub were relaxing. Marching straight he walked to the water bed, drank some water and moved back towards the cub. The cub was in playful mood & went on to the small hilltop and into the foliage to hide. CHOTTI MADA on the other hand, also went up the hill inside the foliage, while UMAR PANI was arriving. While I was looking at all this, I was of the opinion that both the mother & cub are now gone through the foliage towards the kill. Hence I was also not keen for that moment to take any further images of the UMAR PANI male tiger as he was on the ground facing his side back towards us. 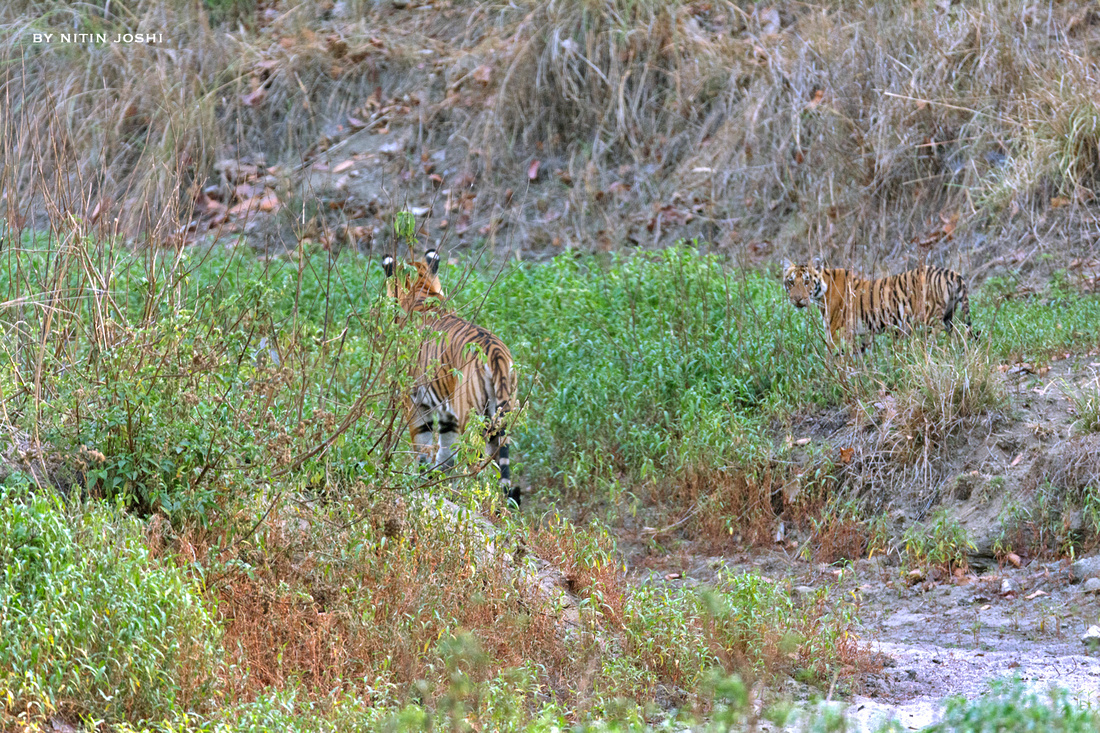 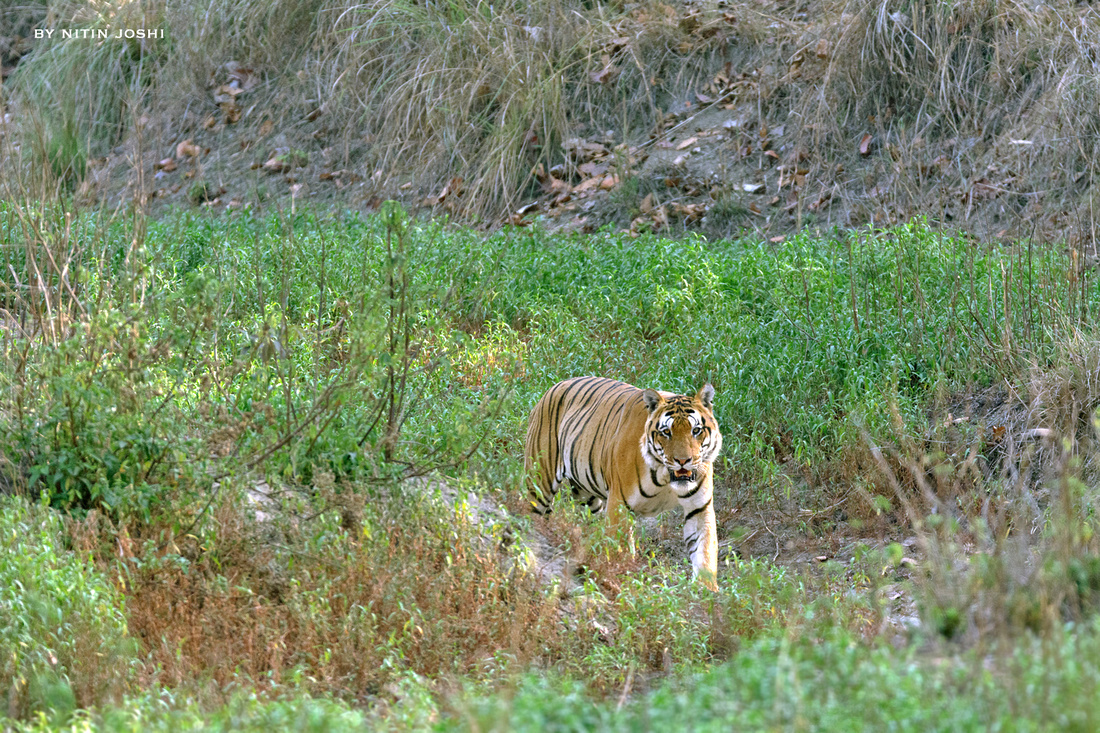 The entire crowd around was also relaxed waiting for him to turn towards us and pose. Being a photographer, I was keenly observing him through my lens; lest I miss any moment. But to my surprise, Umar Pani suddenly changed his position, ears in alert position, tail wagging consistently and firmly staring at one corner of the foliage. I said to my drive Mr. Ramprasad that “he is stalking”. No one believed me as they said sir kal hi to kill kiya hai. And that moment I felt that they must be right because it’s the only family of two (CHOTTI MADA & cub) to relish on the 29th April deer kill (usually back to back kill happens when there are more than 2 cubs as the kill size is not sufficient for all). But he continued to stalk. And suddenly stood up and took a jump inside the foliage. I couldn’t see anything just the noise of the foliage along the movement of the tiger. And the noise progressed to be even louder with noise of fast moving and running tiger. For a moment we all thought that there must have been a fight between the male and female tigress over the cub (male tigers tend to kill his own cub if he sees him as a threat to his existence/territory. And also while he was stalking he was looking along the same direction where the cub jumped and took a hide). Suddenly out of the foliage a tiger jumped or rather fell and also the second tiger jumped. It went all dusty and I couldn’t figure out what was happening. As the dust settled in about a few seconds, we could see a tiger on the kill and the other tiger looking at them. On closer look through lens we saw that CHOTTI MADA had a female barasingha in her jaws and UMAR PANI male was watching her. UMAR PANI was present till themale barasingha took her last breath and later moved away from that place. CHOTTI MADA took the kill inside the foliage and UMAR PANI kept on walking to find to a place to take rest.

What was surprising was that we were still thinking as to why did they hunt as it wasn’t even 24hrs that the last kill was made. On further discussion we arrived at a very interesting perspective. The kill was actually done to teach and train the little cub on how to do a kill. I sequentially went into the flashback of events as to- how close was the female barasingha to male tiger (and she wasn’t aware of their presence), looking at the distance of the kill and presence of the cub, the male tiger stalked and approached for kill, the barasingha went running to the side ways unfortunately where CHOTTI MADA was present and even CHOTTI MADA played her role and helped UMAR PANI to execute the kill in front of the cub.

At end for me it was to witness the most blessed natural history moment where both male and female tiger were present during the hunt and that too to make the cub learn how a hunt is to be approached and killed. I think there was a lot to learn for both the 5 month old cub and me. 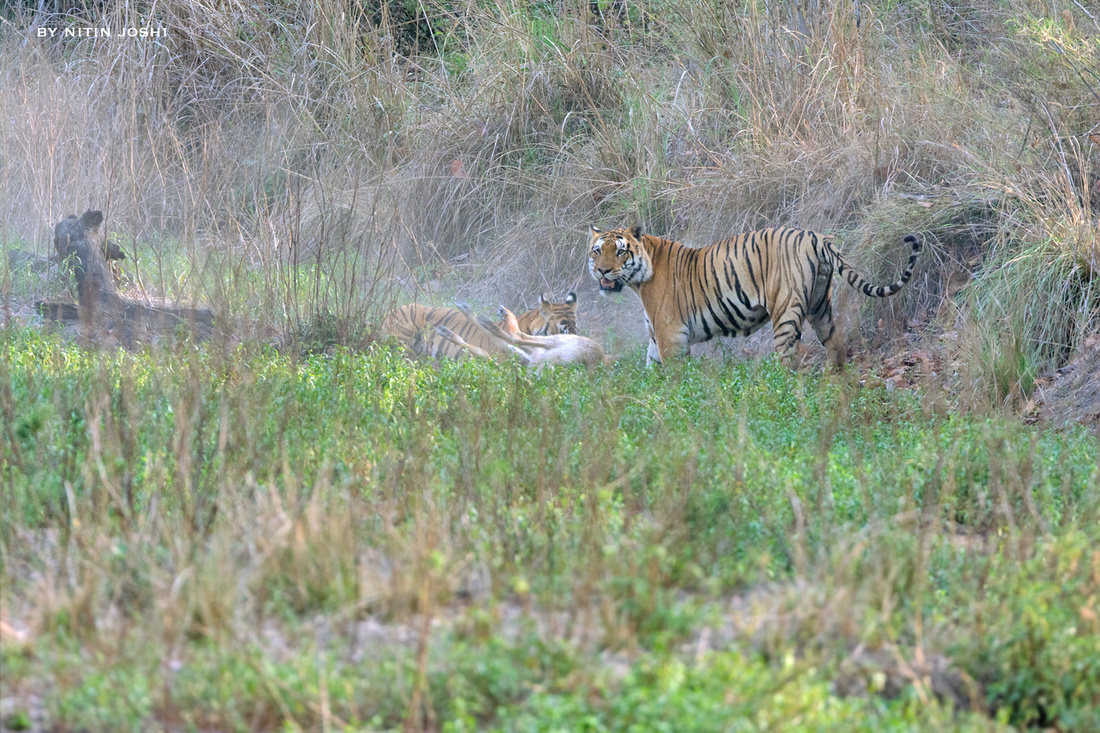 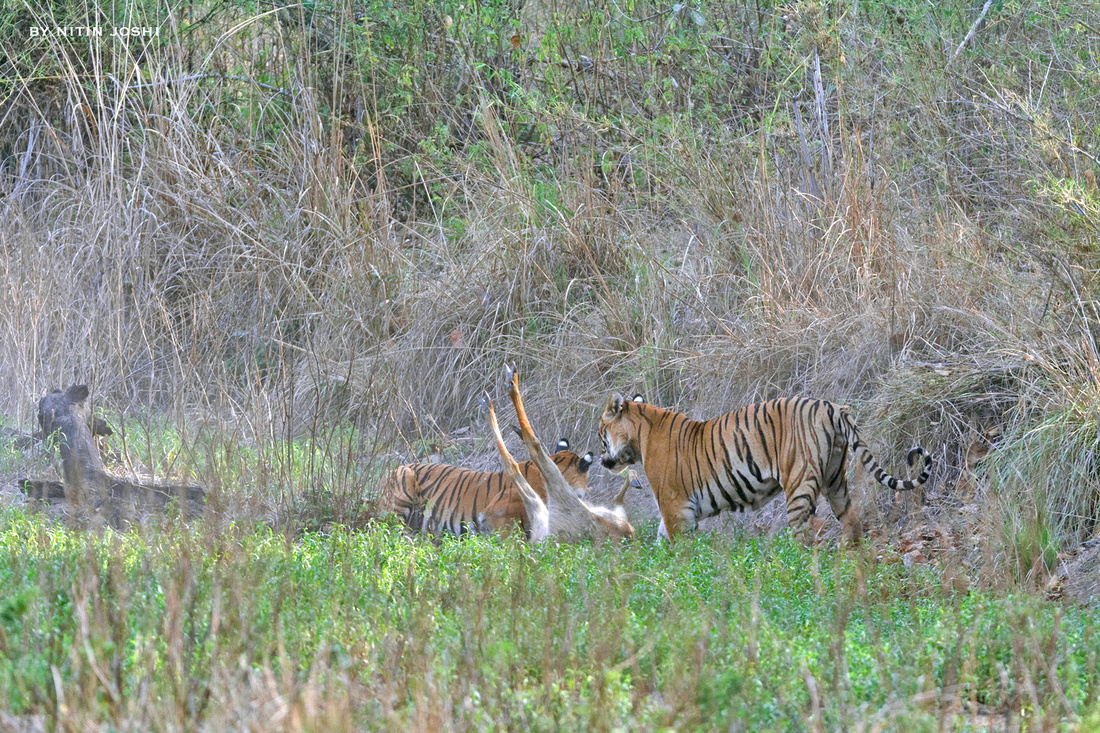 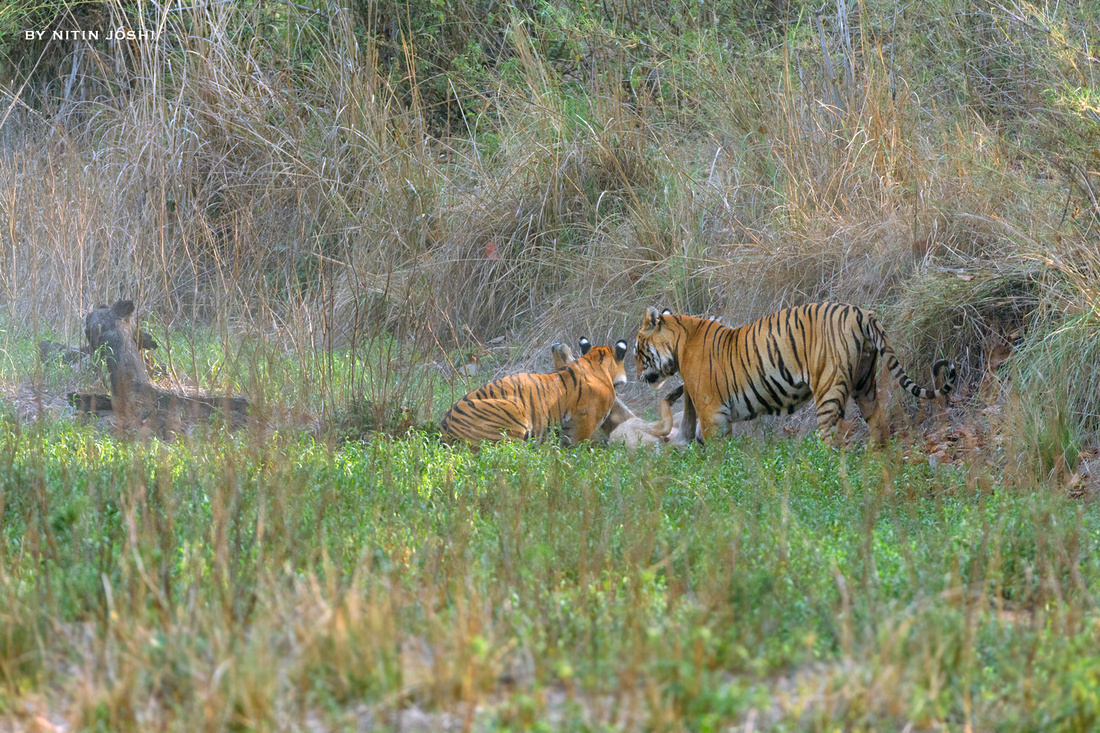 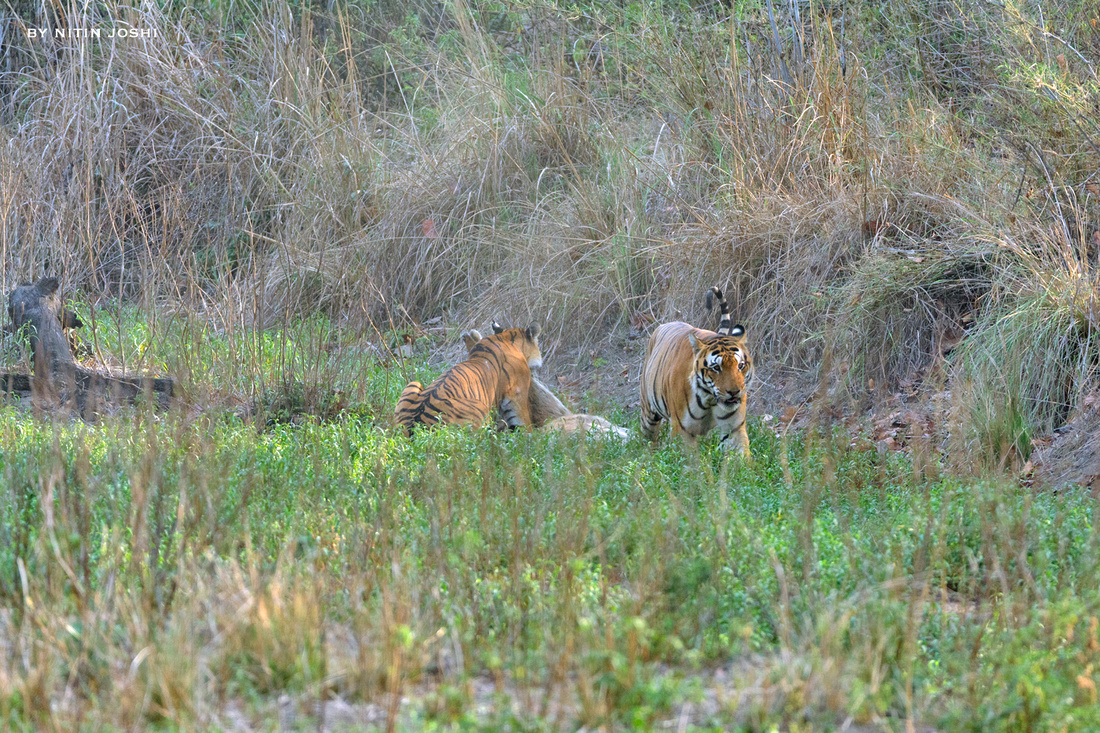 best spa in GTA(non-registered)
Yes, It is really much thrilling if I even think tiger killed during hunting.
Nakliyat Yapanlar(non-registered)
Sweet website! Incredible! Very cool images!! Awesome pictures, Great photographer, Follow your dreams and keep up the great work. Looking forward to checking out your pictures and page. Congratulations achievements
Bhaskar Dutta(non-registered)
This is such a thrilling minute-to-minute description of the events that you experienced. It seems like I am standing behind you in the jeep looking at the scene as they unfold!
Dinesh Bhaktavatsulu Naidu(non-registered)
Life time thrilling experience . Experience more adventurous moments in future !!!
Rahul V(non-registered)
This is brilliant!! Keep'em coming!
No comments posted.
Loading...
Subscribe
RSS
Keywords
nitin joshi photography naturesprogeny co-existence creative fishing flamingo in leaving mangroves mumbai
© NATURE'S PROGENY- By Nitin Joshi
Powered by ZENFOLIO User Agreement
Cancel
Continue