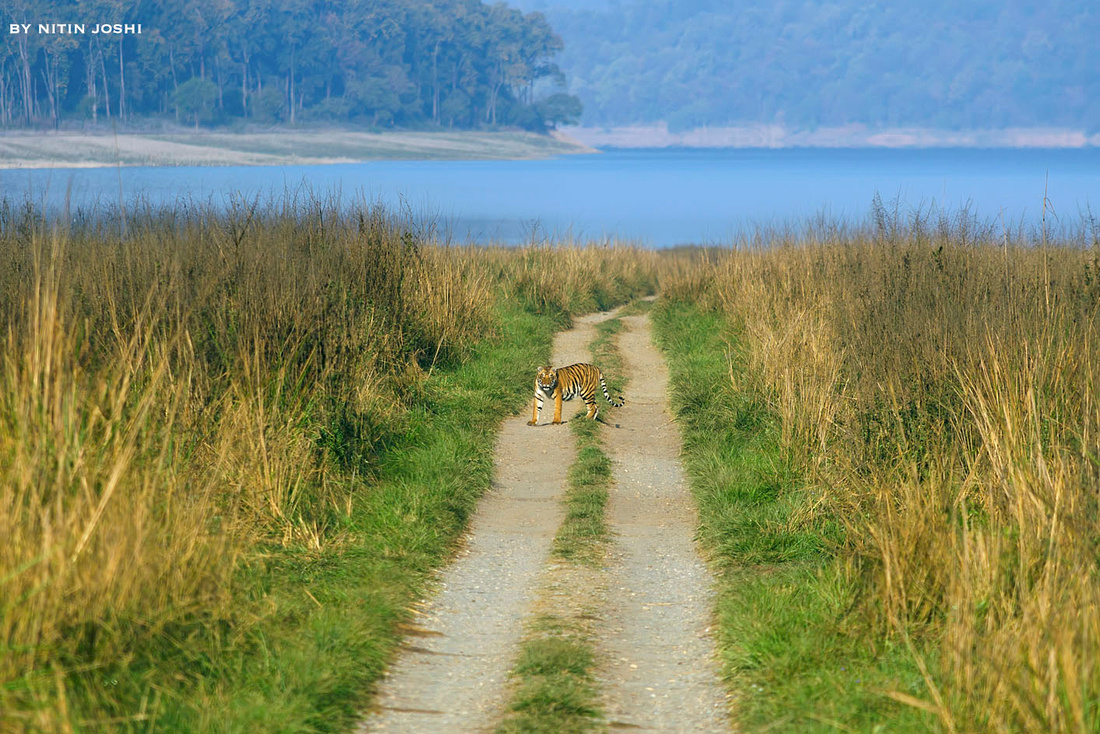 It was in the month of March’14 that I visited to Jim Corbett National park with my wife. It was a long awaited decision since the time I bought a DSLR and explored it enough to operate on manual modes. Jim Corbett was a natural first destination – my much dreamt about wildlife destination.

I went there with absolute no expectations. I simply wanted to experience nature, be blessed and to witness the beautiful creations. But seemed like Mother Nature had decided to bless me in my first time – beginners luck as it is commonly known in wildlife photography language. The jungle did not send me back empty handed.

The day of getting blessed by the nature-

A night before the D-day my good friend or rather brother (as he is dear to my heart, and a fantastic wildlife photographer) was residing in the room which was close to the boundary of the grasslands. That day in morning when we met he said that he heard a lot calls coming from of grassland. People applied their mind majorly driven by Sagar and the driver that the cubs would be still in the grassland. We were the first to leave the FRH gate and went straight to grassland and patiently waited. It was a misty morning. I checked my frame settings, did camera adjustments and was all set. Trust me it was magical dawn. The yellow golden light of early hours, the yellow-green meadows on both the side of the trail, with the blue background of Ramganga river and mountains. Although a first time visitor, it was not difficult for me to imagine that this is a perfect setting - a dream frame. Time passed by, 10min-15mins-25mins the wait added on to my eagerness to see that majestic beauty in this scenic background. 25-30mins passed by, Waseem-the drive said lets go to Thandi Sadak (its on the other side of the grassland) as it might have happened that the cubs would have crossed and went over to the other side. I stayed quiet not saying a thing. Sagar said let’s wait here for some more time. And while the whispering was on, suddenly the driver called -  Sir….TIGER…!!!

It was a speechless moment. The tiger came out of the grassland and walked about a yard. He was a young cub (maybe 1.2-3 year old). He stood there, observed us eagerly for a moment and then vanished into the grassland.

It was unbelievable. He looked directly at us. I felt as if the tiger was directly looking into my eyes. The royal walk of the cub coming out of the grassland and with ease that he stood there was nothing less than a king standing with pride. I was excited, slow to start with the camera, but managed to take 8 frames (4fps, with 2sec burst), and managed to get few good frames. Even though new in the field I could sense that 1) 2 sec burst and after that tiger left 2) my delayed response after few seconds (say 2-3 sec) I calculated that the tiger was visible only for 4-5 seconds. This 4-5 seconds changed the whole scene and I got what I shall cherish all my life.

What I can only say is that- Blessings can’t be seen and felt, it can only be experienced. I feel my perseverance for this long awaited visit to Corbett was a blessing showered on me by Mother Nature.